I was lucky enough to spend a few days in Washington D.C. recently relaxing with my husband and taking in the sights. Nate started his job out there last week so we drove out on Thursday, May 29th and I flew home to Chicago on Sunday.

As a side note, I’m not moving to D.C. too. Nate’s only starting there and we expect to be moving to a new office (yet TBD) sometime in October/November. I’m still in Chicago for my job!

Now back to the Washington D.C. trip. 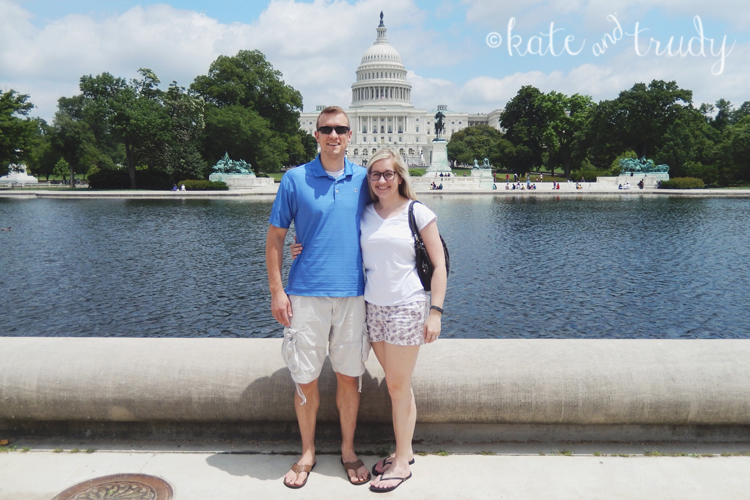 We had a super smooth road trip. After dropping the babies off at their cage free boarding facility and grabbing Starbucks, Nate drove all the way from Chicago to just before Cleveland where we stopped for lunch. I drove from Cleveland to our favorite stopping point, Breezewood, PA! Anyone ever been? We always stop for DQ there, but I made good choices considering my sugar detox and only ordered a mini blizzard. I couldn’t skip tradition! Nate drove the rest of the way.

We rolled into D.C. at about 8:30pm, parked at our hotel, went to check in and found out our reservation was cancelled. Cue near meltdown – long day of driving, ready for dinner, and ready to relax, only to be met with this situation. I pulled up the reservation online from my iPad showing it was indeed NOT cancelled and even remembered getting a welcome email from the hotel a few days prior. They pretty much challenged me for 10 minutes (?!!).

Long story short, after finally engaging a manager, they gave us a room for close to the rate we booked. I couldn’t believe how awful the customer service was in this whole ordeal so the next morning I reached out to the travel agency I booked through and they helped us out. Let me just say, the DoubleTree in Crystal City LIES. We’ll never be back.

One positive thing about the DoubleTree is that they have a rotating restaurant on top of the building. We ate there for dinner around 10pm and had a much needed glass of wine. Unfortunately, the weather wasn’t that great so views were limited, but it was very cool nonetheless!

After a very lazy morning with a little cross-stitching catch up while Nate did the smart thing and worked out at the hotel gym, we headed out to see the Capitol. We started at the Washington Monument and walked all the way towards the Capitol. We walked around the east side and around again towards the north. It was right around the northwest side of the Capitol that that local police started blockading the streets. I’ve seen it happen in Chicago when the Vice President was in town but it was so much more exciting to see it in D.C. because these officers are MADE for this. It’s so organized and regimented. 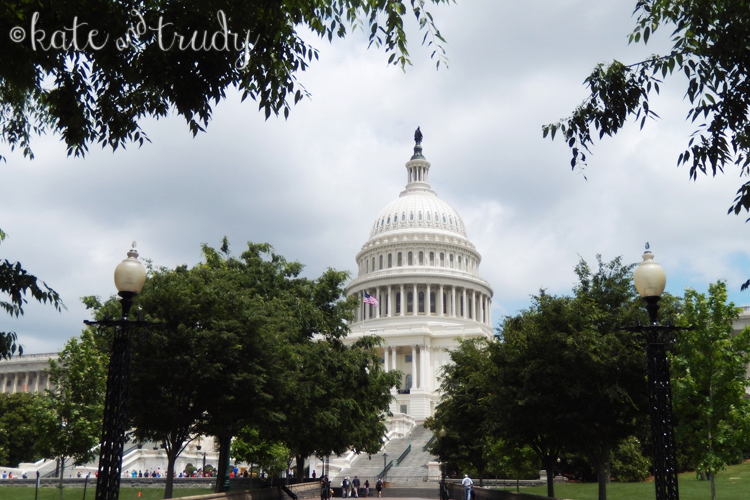 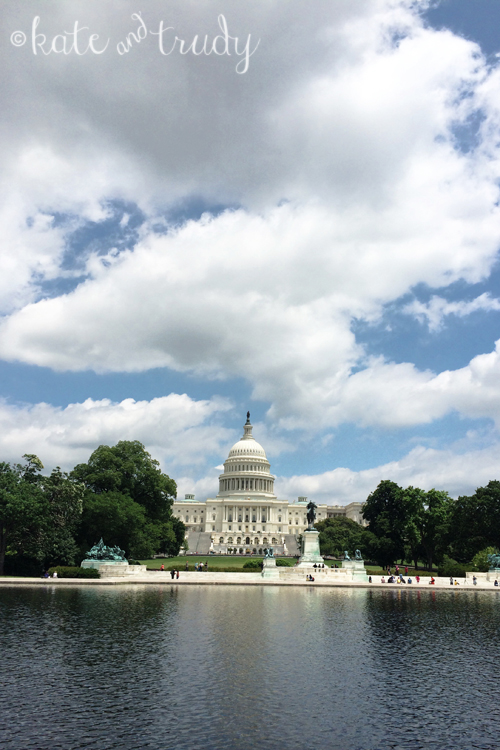 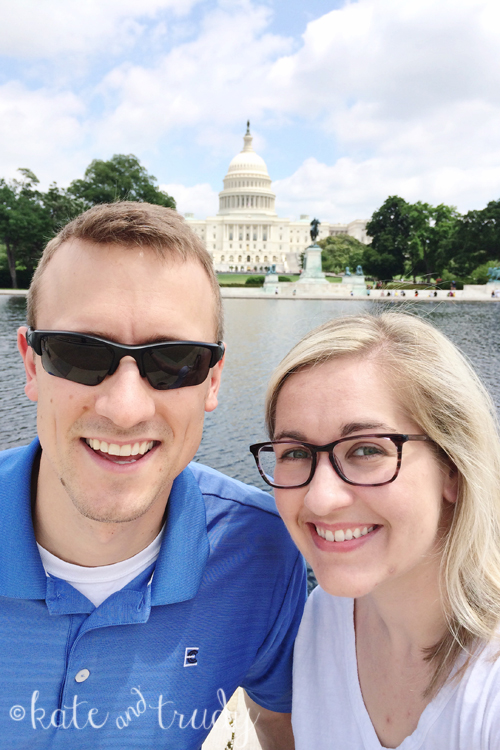 About 6 black SUVs, a couple cop cars, an ambulance, and some motorcycle cops drove by heading east. I think Obama was at the Capitol that day (talking to Congress about the TWO resignations) and they were headed to pick him up. We didn’t get to see the return trip towards the White House but it was a very exciting thing to see nonetheless! 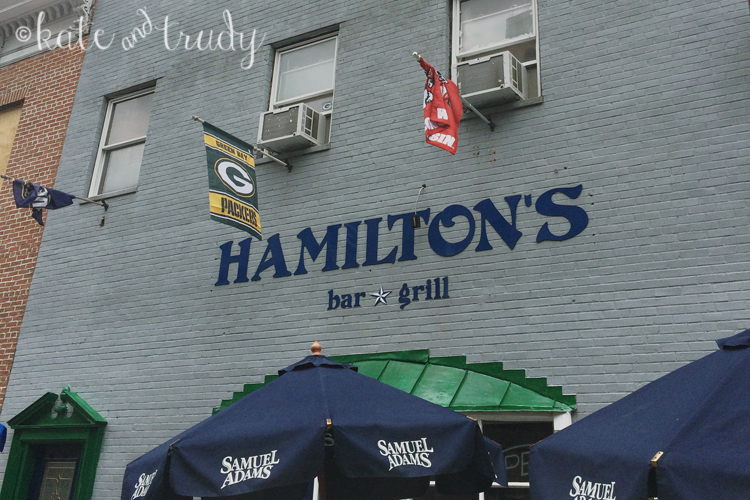 We rounded the corner and happened upon Hamilton’s which is a WISCONSIN BAR! Hooray! A random Google Map find turned into a mecca for my alma mater. Like a mirage in the desert. Ha! We had a great lunch then headed back towards the monuments. There was a little bit of time left so we stopped in the Air & Space Museum to check it out since it was free admission. It was pretty packed with kids and tourists so we didn’t stay long, but it was pretty cool to see!

We had dinner plans with my friend Melissa and her husband, Chris, at Faccia Luna near Clarendon in Arlington. We got there a little early so we enjoyed walking around to check out the area and found a British candy store right next door (damn sugar detox!). Dinner was fantastic and the conversation was so consistent the poor waiter couldn’t get a word in edgewise. LOL! We had such a great time. We ended the night by checking out a really cool new ice cream parlor called nicecream that mixes up your flavor in a stand mixer then turns it into ice cream with liquid nitrogen. 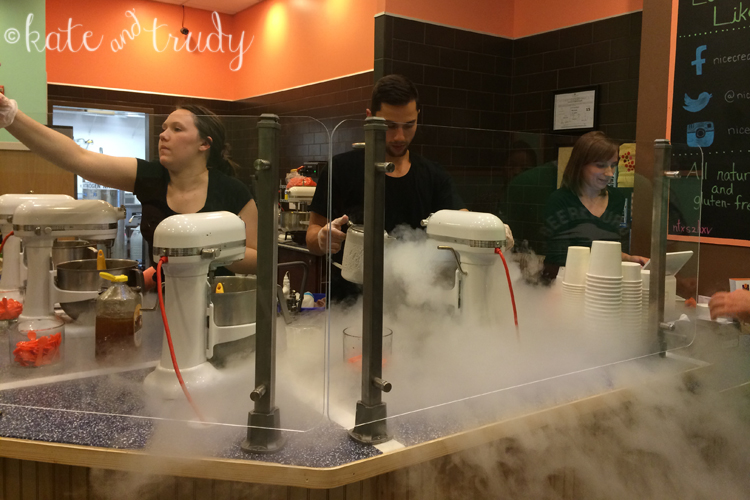 We decided to check out the Metro on day 3 so we bought our fare cards and hopped on the blue line to Arlington Cemetery. We walked from there over the bridge towards Lincoln Memorial on what was a GORGEOUS day. When we got to the Lincoln Memorial, Nate was so impressed with its size. He’d always imagined the structure and Lincoln himself to be so much smaller (by the way, this was his first trip to D.C. – a US Marine, age 31 – ha!). 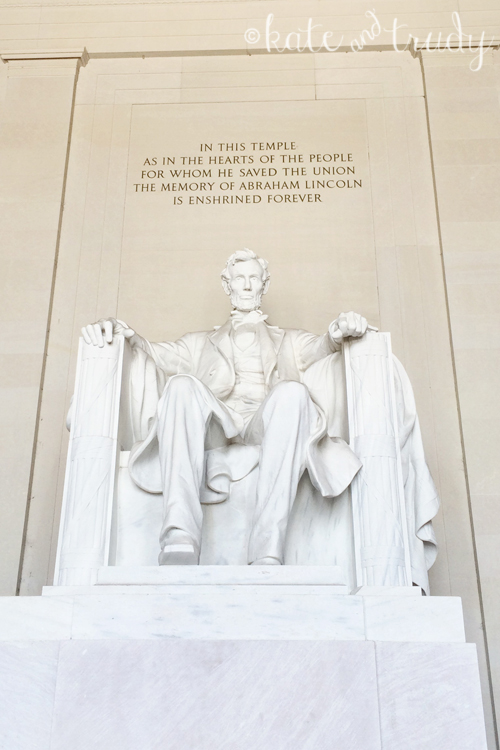 We turned towards the Washington Monument and were in awe with the view with the reflecting pool in the foreground. Seriously, we could have sat there for hours (and some people probably were!). We could also see the Capitol far in the background which was so cool to imagine how far we’d walked. 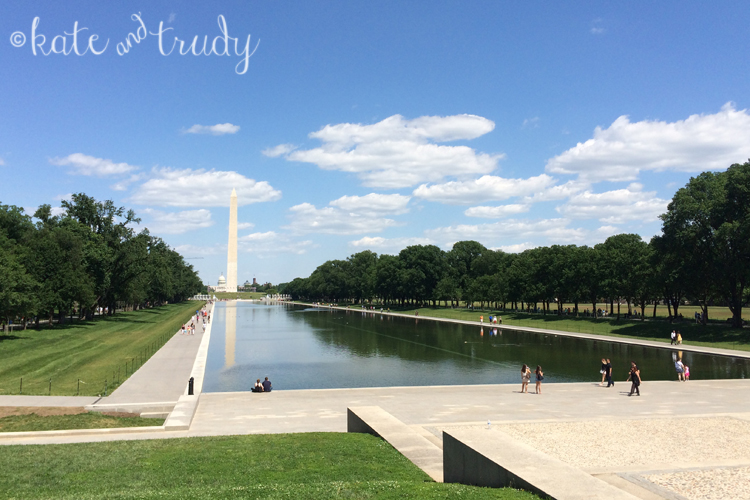 We then made our way towards the Washington Monument, stopping at the World War II Memorial along the way. Another incredibly impressive monument. 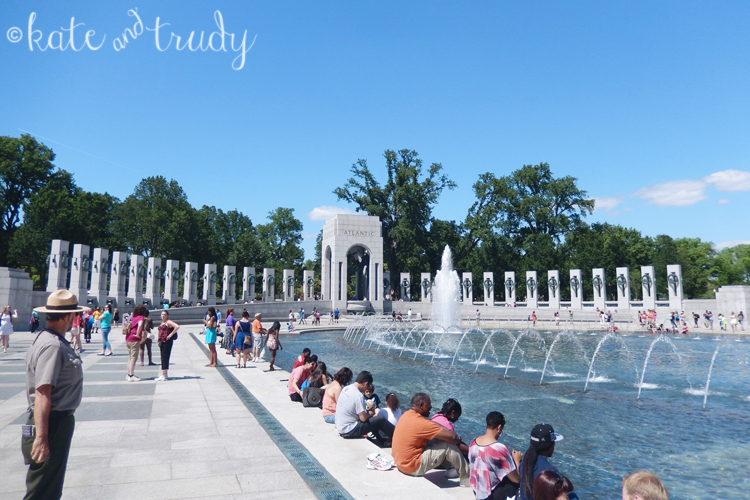 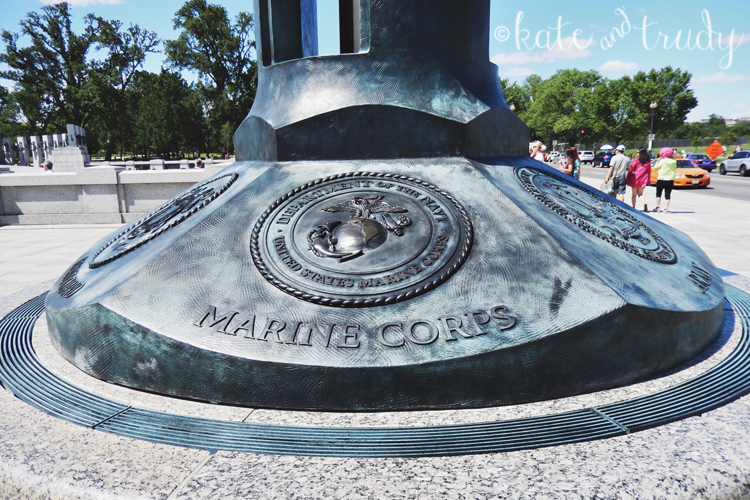 When we reached the Washington Monument, we decided to take a little break on the grass. Kids were flying some kites and it was just such a beautiful day. Too bad we didn’t have a little picnic prepared! After two kites found their way onto the ground next to us (requiring me to get up and set them back in the air because I’m polite like that), we got up to head towards the White House. 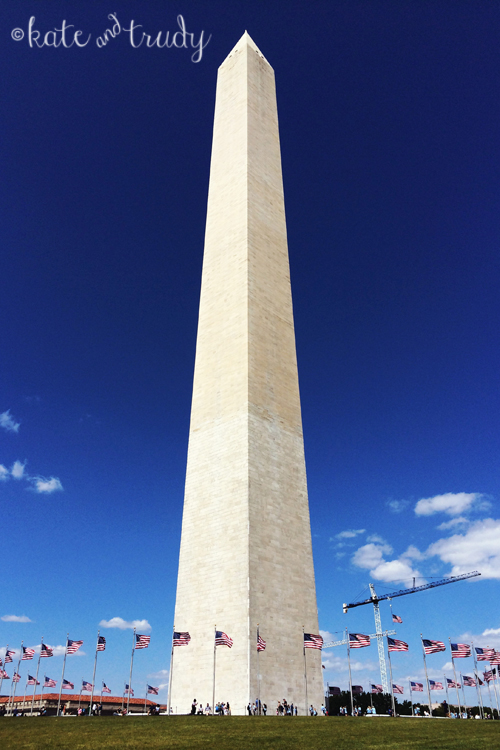 The White House is a quick hop from the Washington Monument but when we got there, the fence from the front is soooooooooooo far you can barely see anything. I managed to get a good shot of the front by zooming, but still! The back of the White House is much easier to view, so we walked all the way around to check it out. 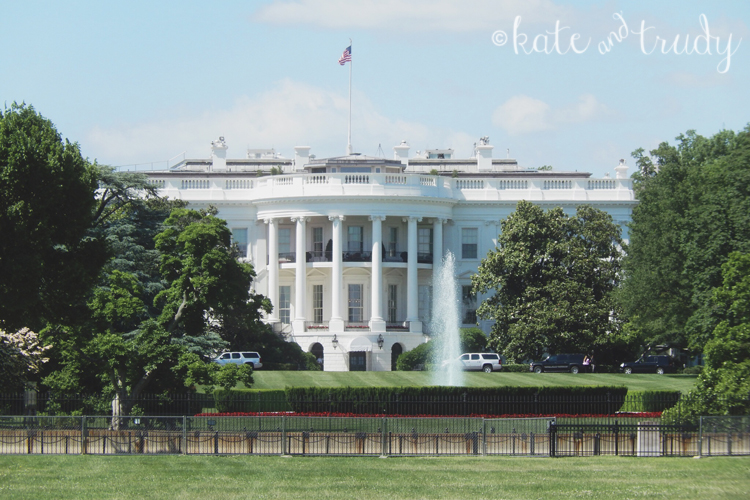 At this point, we were so exhausted. We’d pretty much seen it all in two days (without physically going inside or formally touring anything) so we were ready for a drink! We found a bar (Bottom Line Saloon) just a few blocks from the White House and ordered some drinks and delicious appetizers. The bartender was so fun to chat with and I would definitely go back to this bar if/when we return to D.C.! After a couple hours, we decided to head back to our hotel, order some light food and watch a movie on the Netflix app. We were beat!

Day 4: Back to Chicago

Nate dropped me off at Reagan around 10:15am so I could catch my flight and he checked into his corporate housing to get started on his job first thing Monday morning! That’s pretty much it for Sunday. I picked the doggies up when I got home and the few months of “single dog mom” began. Ha! 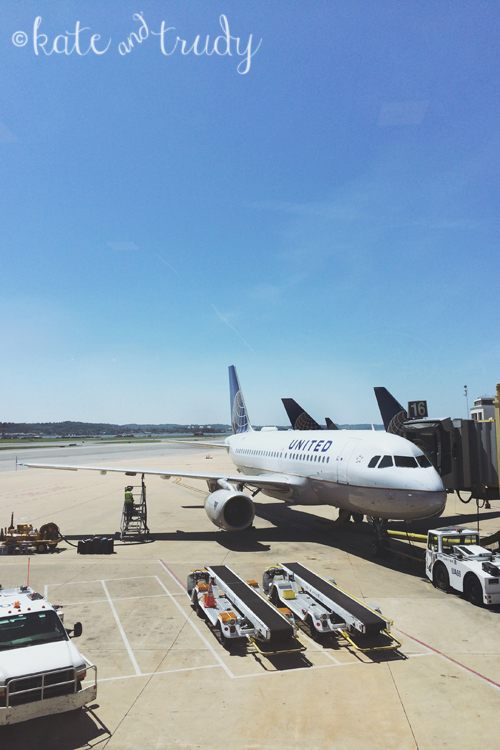 It’s been a full week since we started this new schedule and while it was tough (mostly due to my day job), it’s been manageable. I’ll admit, I’m kind of liking the 6am wake-up calls that get me up and at em’ first thing.

I’ll be excited when we get back to a normal routine together, but I’m MOST excited that this new chapter in our lives has finally begun!